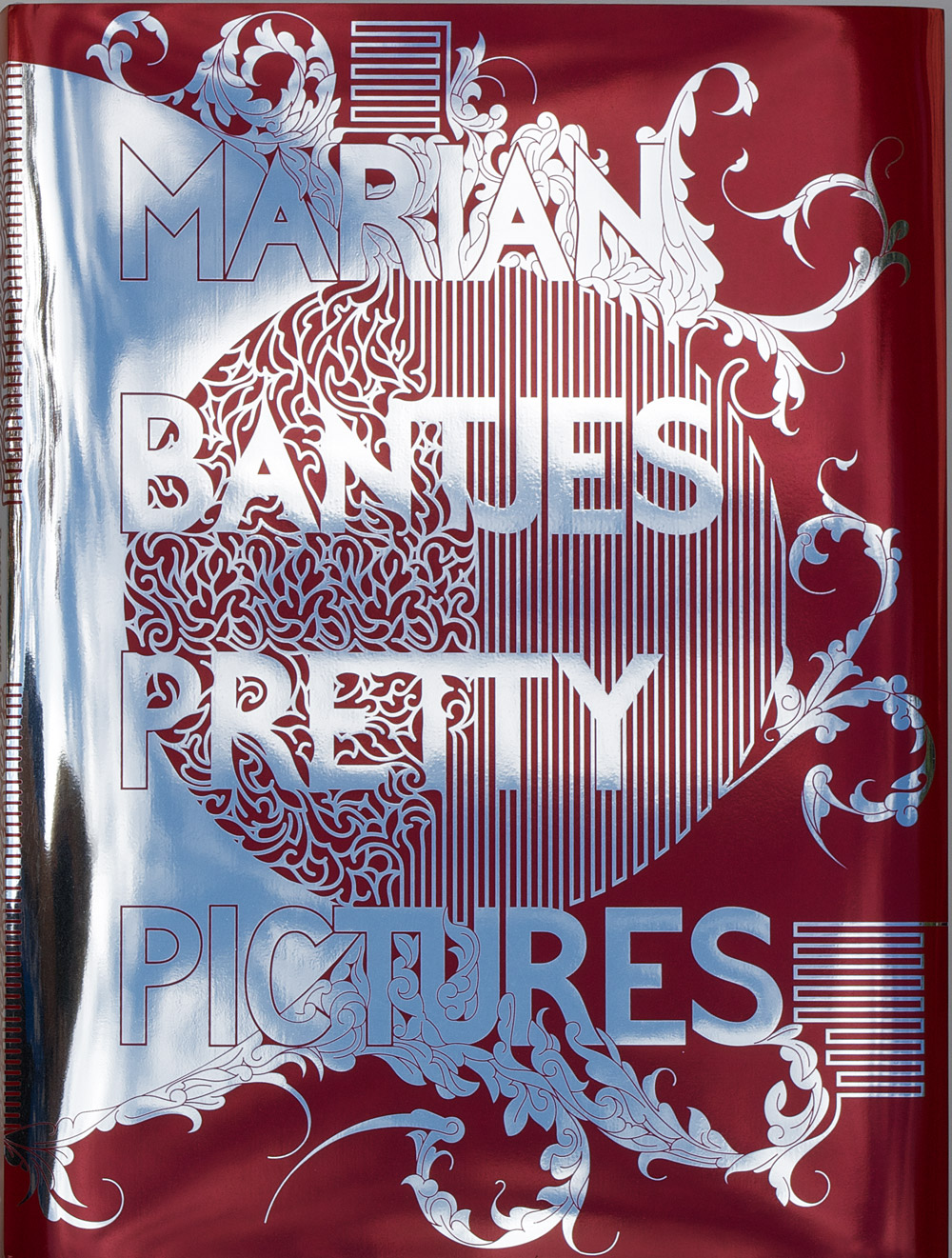 Marian Bantjes Pretty Pictures
with a Foreword by Rick Poynor

Buy from The Book Depository

Buy from a bookseller near you via Abebooks 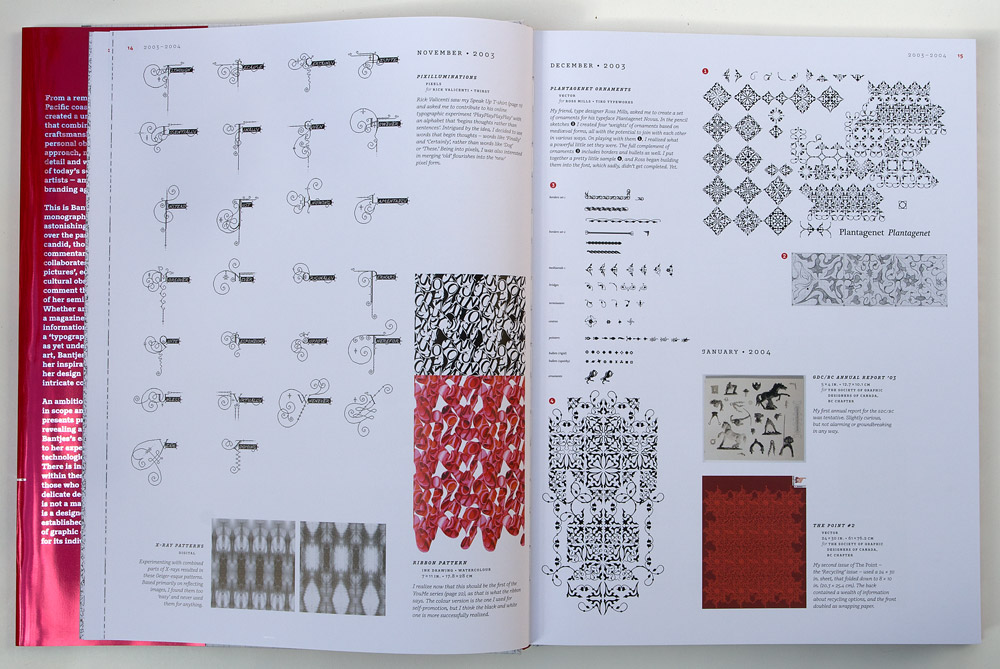 This is it. This is the monograph of my work. It comprises almost everything I’ve done from 2003–2012. It took me a year to compile, design, write and produce (working once again with the wonderful Lucas Dietrich from Thames & Hudson). It contains somewhere around 800 images, including sketches and rejected concepts, with descriptions of each project and my thoughts (often painfully honest) on each. While many monographs truly are just books of pictures, I wanted to create a book that answered many of the questions people ask me about my work, and showed both the process of some of the pieces and the progress and development of my career over the past 10 years. This book is full on intense. It’s not the type of thing you flip through and absorb at a sitting. In my usual manner, it is dense with imagery and information. The book may seem expensive but you get a complete wealth of information. My intention was and is to never speak about this body of work publicly again. Everything I’ve ever had to say about the specific work is here: the details, the anecdotes, the stories. It is done.

I was also thrilled to have Rick Poynor agree to write a Foreword to the book, and in this he exceeded my expectations. I couldn’t ask for a nicer Foreword by a more eminent person. Pretty Pictures is arranged chronologically. It begins with a quick overview of my career as a book typesetter (1983–1993) and then as a graphic designer (1993–2003) with a splatter of thumbnails from my work through that time, and then jumps  to the heart of the matter with the work I started on my own in 2003 in an attempt to make a living doing work that I love. Each year begins with a synopsis of how I felt about that year’s work. Projects are listed by the month they were completed, with descriptions of the work, how the job went and my opinion of the final, with significant projects expanded to include sketches and other elements of the process where useful. An index in the back lists projects by name, clients, groupings (“Posters”, Patterns” etc.), materials (“Pasta”, “Tin Foil” etc.), categories (e.g. “Rejected. See also Died, Killed”) and a list of Fonts used in projects. It also includes lists of other books and magazines my work is in, and conferences I have spoken at (up to September 2013). While most art and design books are designed around a strict grid system, I needed more flexibity than this could afford. Because the book contains so many projects, some important and some minor, and because I already had a chronological structure I decided to allow myself to put the projects in any size that made sense and create structure out of each page spread. I allowed some fudging on the time scale (perhaps by a month) to accomodate interesting parallels between work and the visual balance of pages. This made things harder for myself than plopping  things into grid spaces, but it makes a much more dynamic and interesting design overall. 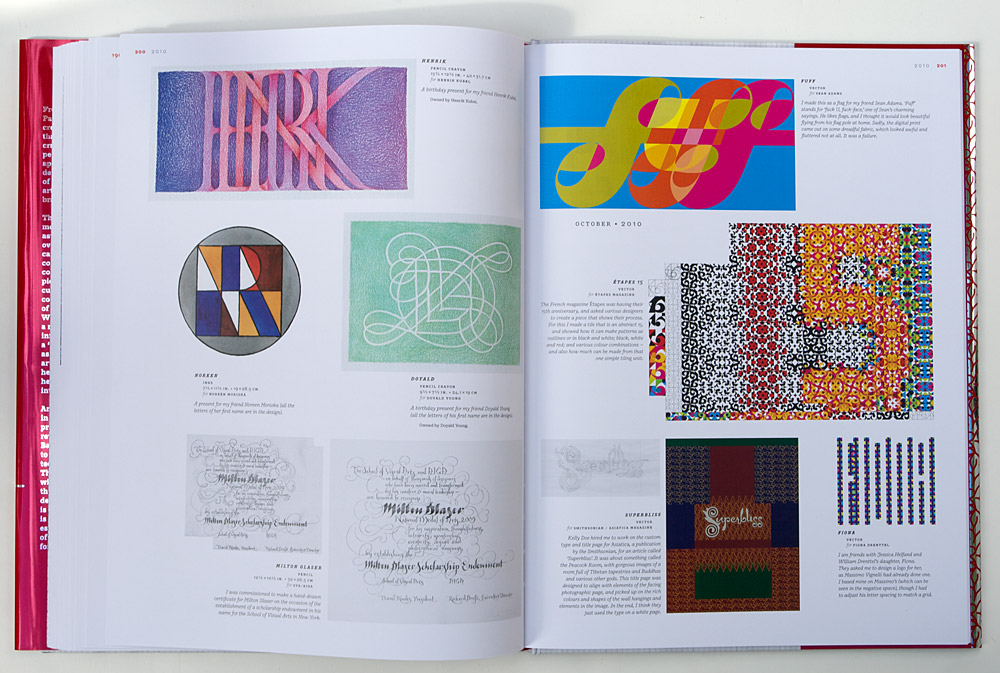 Brain Pickings: Beyond Pretty Pictures: Marian Bantjes on Serendipity, Success, and the Whimsy of Design

Pretty Pictures [is]  — a magnificent and monumental six-pound monograph that is, of course, far more than what the irreverently literal title suggests, inviting us into a life’s-work wonderland of enchantment, beauty, thoughtfulness, opinionation, and imaginative defiance of convention
[…]
absolutely stunning, at once a treasure trove of visual mesmerism and a fascinating glimpse into one of the most singular, inventive, and influential minds in contemporary design.

It’s a bold decision to title a collection of your life’s work to date with what could be taken as a dismissive criticism of it. But calling her new book Pretty Pictures, as suggested by the designer Rick Valicenti, captures perfectly the character of Marian Bantjes, who has both the confidence and wit to confront the slight head on – in shiny mirrored silver cover stock.
[…]
Just as the metallic cover reveals a surprise underneath, Bantjes’ book offers up plenty of her thinking behind how and why she does what she does. She has said the book is partly a way of explaining the processes that led to the work she is often asked about; so that she can move on. While she does that, it would be wise to enjoy the fruits of her last ten years in the pages of this beautifully produced, highly personal book.

Texture and detail are brought to life on these pages, and there’s a wit and humble self-deprecation to the way she writes, which should chime with a UK audience.

In the Venn diagram of art and graphic design, Marian Bantjes has more reason than most to be placed smack in the middle of the all-important overlap. The Canadian’s intricate, unashamedly maximalist work sits proudly at the intersection of these sometimes uncomfortable bedfellows and her new monograph is a terrific celebration of what Rick Poynor in the book’s introduction calls her “explosive graphic invention.”

Though her ornamental typographic style is often imitated, Marian Bantjes is peerless. Her work can be seen in covetable Saks Fifth Avenue shopping bags, in publications like The Guardian, Wired, and the New York Times, or even in your designer friend’s wrist tattoo. The book jacket is silkscreened in red on glorious mirror-reflective mylar, wrapped around a hardback cover, which reveals a surprise.